As a chef de cuisine, Markus has already experienced a lot. Here you can read through a short summery of his carreer:

Everything began with Markus' application as a young cook at the Hotel. As son of a winemaker in Langenlois he had already some practise from his years of apprenticeship at the Hotel Sänger Blondel at the Wachau region. During the following summer season he intended to start into his carreer at a hotel cuisine at a 4**** hotel in London. But it never came to that. Markus Hagmann fell in love with the hotel owner's daughter Nicole. Over time Markus had enough of the private and business connection and started working at the Stanglwirt. Three years later, Markus' dream came true: at the Ana Grand Hotel in Vienna, he cooked at the famously awarded French restaurant "Le Ciel". Nicole accompanied him during this time. However, her parents were not that happy since there was much to do at the Feldwebel. Markus was convinced that Nicole needed to see other hotels, be away from home. After 6 months, however, Nicole moved back home and Markus stayed for 2 more years. In retrospect, this period of time was important for both of them. "Only staying at home and helping at the family business does not form a self-confident person. Only moving away and making experiences and learning something new helps you to grow and to receive appreciation and respect", says Nicole Hagmann. 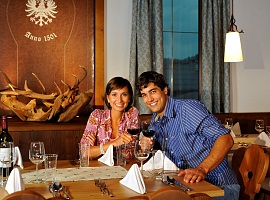 Our Restaurant
The new and elegant Feldwebel hall with buffet area and hotel bar offers the perfect space for some time with your family and friends. Our house is widely known for our high-class cuisine! We offer something for every taste...
more infos 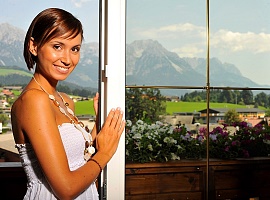 BOOK ONLINE!
Make use of our new web booking engine and book your next holidays at the Feldwebel here!
more infos